Look Who Followed Me Home.


I go to the local thrift store at least once a week.  When I went in a few days ago I saw a vintage sewing machine on the floor.  It was even marked half-off.  The clerk told me it had been there a month and that is why it was priced so low.  I don't think I could have missed it on other trips.  Maybe it was hiding somewhere, waiting for the right person to follow home.  Someone who would marvel at its mechanics, simplicity,  and beauty.  Someone who would oil it and take care of it.

I plugged it in to make sure it worked.  It worked!  Of course it would.  It was made in Rockford Illinois in the 40s.

I guess my new friend somehow knew I was the one to take good care of her.  Yes, I changed to calling my new machine, her.  She is so special.  I don't know why this machine is not held to more acclaim by people. I guess I can appreciate her so much because I appreciate Model A Fords, Wringer Washers, Vintage Sewing Machines, and most vintage mechanics.  This machine is for a tinker like me.  Because there aren't needles and bobbins readily available, so you have to make what is available fit.

I am going to call her Alice.

Alice has some eccentricities that attract me to her:

An interesting name-brand.
Friction drive.(I was afraid it would slip. Not a chance! I kept doubling denim and sewing. She Purred.)
Straight-Stitch with reverse.
Feed-dog adjustment. (really just a disconnect, but manual calls it an adjustment)
A hand-wheel that goes clockwise instead of counterclockwise like modern machines.
A shorter needle than modern machines. (Grind the shank down on a 15x1 needle to the correct length.)
Uses the same bobbin as a Singer Featherweight. (A little filing on the bobbin lock-lever to fit bobbin winder)
A front mounted light switch.
A very well-lit sewing area.
A smooth and quiet purr.
A super-straight stitch.
A single plug-in in the back to keep wires out of the way.
Only weighs 20 pounds.
Wow!  I didn't know I could get so worked up about a $4.25 sewing machine.


A video is worth a thousand words.  Lets watch.


Thanks for stopping.
Posted by Thin Man Sewing at 2:16 PM 32 comments:

I finished my Mod Shorts after a few roadblocks. Like the pattern size being off a little and my choice of size to use was off a little.  That made for 4 1/2"  too large of waist for me.  So I ripped the seams, cut down and made  the correct size for me.

Then I wanted to serge the leg seams.  But a needle broke just as I started.  I had to wait to get some more needles from my house.   Oh, did I mention Joe and I have been living with my parents since February due to my Dad's health and also we have such terrible neighbors it was making our health worse.  We have a bid in on a house we both love.  So hopefully it will work out.  My Mom and Dad enjoy us being here, but it is nice to be in your own place.

After  the setbacks, I ended up with what I think will be great shorts for playing tourist or doing fun things like wine tasting.  If I golfed I think I would look like a pro!

Yes, there are pockets front and back.  The stripes lined up nicely, so they are almost hidden.  Plus this pattern called for a tuck-line down the center front.  It doesn't show in the photos, however it gives a nice touch in person.

I like this pattern. As long as I remember to choose a size smaller than I normally wear.  I didn't put the pocket flaps on the rear pockets.  I think if I made slacks I would try the flaps for an upscale look.

I would highly recommend this pattern.  Simplicity 1948.

My next project is going to be shorts for Joe with this pattern.  But with lightweight blue denim.

I might even use my new sewing machine.  Blog to come.

This should have been the finish of the Mod Shorts.  I tried them on without the waistband and thought they fit fine.  Of course I guess when I was holding them on by my hand I couldn't tell how big they were.

I went ahead and started putting on the waistband and decided to try them on again.  I am sure glad I did.  They were 4 1/2" to big. 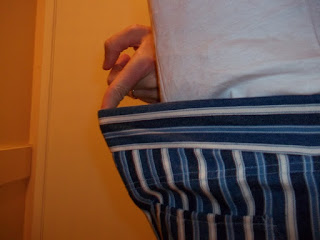 The reviews online mentioned this pattern ran large, so I measured the pattern before I started cutting material.  How I ended up with such big shorts, I don't kwow.  Was it operator error of the measuring tape?


So not quite fnished yet.  I ripped out the threads I had the waistband attached with.  Also the topstitching up the legs.  Then I took them in. 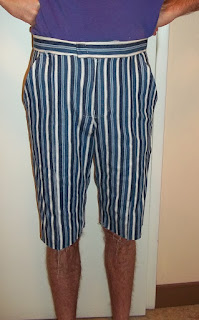 I am now back to where I started today, just 4 1/2" smaller.  I still need to finish attaching the waistband.  Then finish up the shorts.


Thanks for stopping.
Posted by Thin Man Sewing at 4:45 PM 4 comments:

I worked on the Mod shorts today.

I made the back pockets with the help of a template I made by using lightweight cardboard form a 12-pack cola box.  All I did is take the pattern as reference and cut the cardboard to the pattern, then 5/8" off all the way around to make it the appropriate size of the finished pocket.

I ironed the pocket material to fit the template. And voila! Matching pockets.  The pattern called for buttoned flaps for the pockets.  I decided to leave them off. 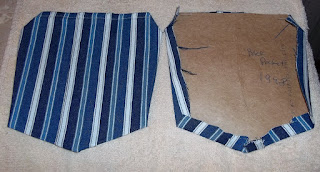 Once I sewed on the rear pockets, I sewed the back parts of the shorts together.  Then sewed the insides of the legs of front and back together, then the outsides.

Now the shorts are looking like shorts.  I still need to put on the waistband, but I tried them on to see how they are coming along.

I am quite pleased.  The rear pockets and yoke seem to be the appropriate proportions.

Time for my little Bel Air Bantam and I to take a rest.

Thanks for stopping.
Posted by Thin Man Sewing at 2:57 PM 2 comments:


I worked on my Mod shorts today.  I put in the pockets and the zipper.

I watched some you tube videos about a zipper fly because the instructions weren't very clear.  After watching the videos I figured I would be more confused than following the directions.   I pressed on. 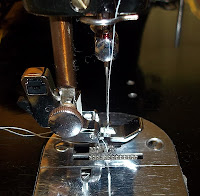 I attached the zipper foot from my Brother to the Bantam.  Worked nicely.


Looks like I start on the back portion next.

Thanks for stopping.
Posted by Thin Man Sewing at 6:37 PM No comments:

I traced the pattern for the size 36 shorts, which should give a 30" waist.  I measured the pattern before I cut it out to make sure the size was about right, because the reviews on this Simplicity 1948 pattern have all said they were too big.  Looks like they should fit.
My eyes kept playing tricks on me when putting the pattern on the fabric.  Those stripes really made things spin.  I can just imagine 40 years ago when fabric like this was common what this sort of fabric would add to someones "trip".

Here is a sample: 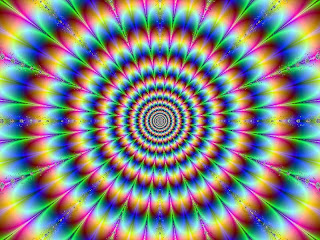 I have only made two pairs of pants.  Each with different methods of making the front pockets.  This pattern has yet another way to make the pockets.

Now that I have the facing stitched to the pocket lining, I can start to visualize how these pieces of cloth are going to dorm a pocket.


It might be me, or the pattern.  But I will mention it.  The tuck line down the front of the shorts would not have been centered if put where the pattern called for.  I adjusted the line to where I though it should be.

Now to start sewing the pocket to the shorts.

Thanks for stopping.
Posted by Thin Man Sewing at 4:08 PM 1 comment: