Back to the Seventies

I decided to make another shirt from the seventies since I like the last one I made so much.  This Simplicity 6249 from 1974 is a unisex pull-over top. I am using a lightweight broadcloth material I had in my stash.

I decided to try on the pattern to check for size and length.  I ended up only adding an inch in length.


I am sewing this with my Singer 626.  I picked it up at the thrift store for a few dollars. This model does have neoprene gears.  Some have metal.  I am certain the gears were replaced because they are opaque.  Not black like the few gear bits I found in the bottom of the case. Also, I don't think it was used much at all after the gears were changed, because they and the whole machine look like new.  So it should last a long time.

This machine has just a few decorative stitches, and does not use cams.  The wind-in-place bobbin works great.  Some machines with this feature have problems, but on this machine it works easy.

You have to love the color!
Back to the shirt.

I was confused when sewing the pocket, because the instructions did not state it was a faux-flap.  I kept trying to figure out where the flap was at in the picture.  Finally, I figured it out.  All I have to do now is sew a button on it to finish.
Since the decorative stitching looked great on my previous shirt, I decided to put my Singer 626 to work.  As seen on the pocket and collar.

Posted by Thin Man Sewing at 3:55 PM No comments:

This was supposed to be a pajama top, but after I began making it, I decided that indeed it would make a great shirt.  I used Simplicity 6436 from 1974.  It is interesting it is shown as a uni-sex pattern.  I think the belt would be a little over the top for me.  So, no belt. 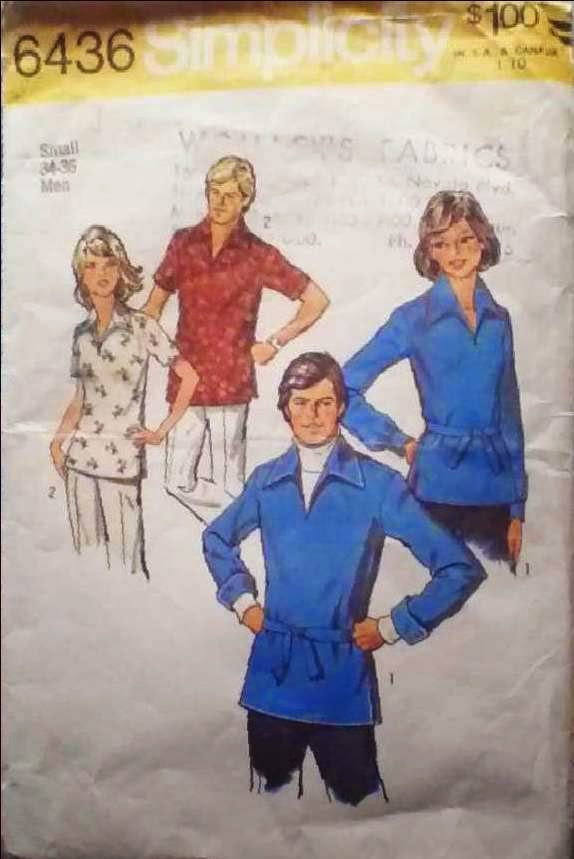 I added two inches to the sleeves and body length.  Otherwise, besides the decorative stitching with my White 571, I followed the pattern instructions.  I serged the seams.   If I made this again, I would probably use flat-fell or french seams.  A quick project called for quick methods of assembly.  After all, this was supposed to be a pajama top. 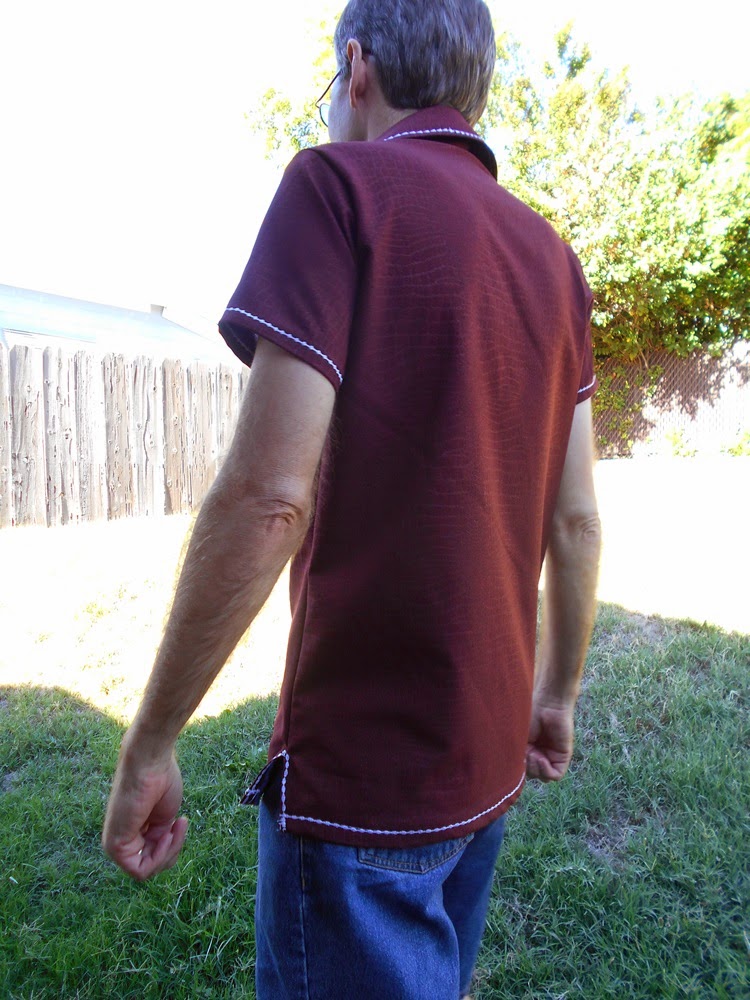 I am glad I have a huge quantity of this fabric.   It is comfy and looks great.  This was a great thrift store find.

Now I am not sure if I will go back to pajama tops.  The crafting urge is hitting me.  Some appliqué, some embroidery, or whatever hits me.

Remember in my last post I mentioned a Bernina I made my shorts with?  Now that the fiasco is over, I will tell you about it.

My pair of shorts was made with a Bernina 1011.  I had this machine only a few days.  It was purchased on ebay.  When it arrived the spool pins were broken off, the power knob was sheared off, the stretch-stitch/feed dog knob was smashed and bent. It was rusty inside and some corrosion on the bottom.  All the knobs would not turn due to corrosion.

I was able to get it going.   I turned the cog for the power and lights to "on" with pliers, so it would be "on" when plugged in like old machines. I oiled and cleaned it up.  The reverse didn't work and the feed dogs rubbed the needle plate.  I adjusted the feed dogs and was able to get the reverse working. The stretch-stitches still needed some adjustment, but it purred and sewed  nice like a Bernina should. I was going to keep it because I felt I had found an excellent deal for $125, even with the shipping-damage.

Then as they say, "All Hell broke Loose".
Joe had me email the seller to tell them in the future to package things better. I also sent pictures of the packaging and the damage.  I didn't ask for money back or anything.

I was pummeled with numerous emails calling me a scammer and a liar.  I was threatened with I should "hide".  And other threats.  The seller said to turn it over to UPS and they would win because the packaging was strong.

So I turned it over to ebay and UPS because of their attitude. Then I received emails from the seller saying the money was taken out of their Paypal and they were out of business because of me.

I had never opened a case on ebay.  I did not know the funds would be seized immediately, but I guess it makes sense.   Then more threatening emails.  Plus, they said they closed their bank and Paypal account so I would get nothing. I am glad these people are in Mississippi and I am in California.

Guess what?  Ebay refunded all my money.  UPS took the machine and returned it to them in the same box and packing it was sent to me.  I  would hate to see what it looks like after another trip across the U.S. in that poor packaging.

Moral of the story.  Treat me nice and I will treat you nice.  If this seller would have simply said I am sorry, I would have probably let it go.  If they had offered $20 to replace one spool-pin, I would have let it go. Their attack on me is what caused them to get their smashed Bernina back and my money back to me.

I miss my Bernina 1011 even though I only had it a few days.  It definitely had a better home with me.  I feel sorry for it.

Did I do right?

Now I am making a 70s shirt which should be "Groovy"!

Thanks for stopping.
Posted by Thin Man Sewing at 3:01 PM 3 comments: