My next project is going to be a pair of shorts made with some fabric from the thrift store. Of course I am going to use my little Bel Air Bantam.  These are going to be "Sort of Mod".

Mod can be defined as:

An unconventionally modern style of fashionable dress originating in England in the 1960s.
Online Urban Dictionary
One who wears modern clothes
Webster's Dictionary

I was inspired by the fabric, and of course the Brady Bunch. 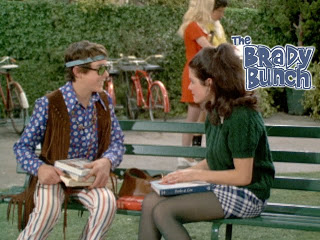 I wonder where I can find a suede vest and groovy sunglasses to go with my shorts?

Simplicity and Butterick made some Mod patterns.

I looked for a sewing pattern for shorts.  Since I didn't find one I liked, I am going to use a pants pattern, just with shorter legs.  Simplicity 1948 fits the order.

The gentleman with the tie is wearing the version I am going to make.

Do you think my new shorts will look Mod with this fabric? 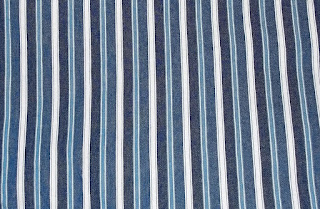 Thanks for Stopping.
Posted by Thin Man Sewing at 3:39 PM 2 comments:

The title is More Cloning around.

It could also be "Imitation is the Sincerest form of Flattery".

After I purchased my Bel Air Imperial in January, I have been intrigued by Singer Clones like it.  There are always Clones for sale on Ebay at outrageous prices.  I decided to watch Ebay for a particular model I wanted, because I was pretty sure one wouldn't show up at my local thrift store.   I was shocked when I won one on Ebay for $30, which I  think is a good price.  I guess bidders had better things to do on a Sunny Sunday afternoon than surfing the net.

Now I have two clones.

My Imperial is a Singer 15 Clone.  It was made in Occupied Japan so I can date it between 1945 and 1952.  It is a close copy of a Singer 15 which is a full size machine.  The base of it measures 7" by 14" and weighs about 29 pounds.  It uses the vertically loaded class 15 bobbin. The 15 Clones were made in tremendous numbers in Japan during the 50s.


If you haven't guessed yet, what I won on Ebay is a Singer 99 clone.  But not an ordinary 99 clone.  This one is even more lightweight because the head is made of aluminum.

The box it came in when I picked it up at the Post Office was so small and light, I thought for sure I was sent the wrong item.  But to my relief and surprise my new sewing machine was indeed in the box.


Wow!  Is all I can say.  This little machine is the same size as a Singer 99, but only weighs 12 pounds. A Singer 99 Plus!  In my research it seems there was an Aluminum Singer 99 made, it was the 99-10.  However it was made in low numbers and quite rare.  I think my Bantam is a copy of the Singer 99-28 because the stitch-length control looks exactly like the 99-28.

I will also guess my Bantam was made in the mid to late 50s.  It was made in Japan and "Badged" with the name Bel Air.  Numerous types of sewing machines were made in just a few Japanese factories in the 50s   They were named whatever the importer wanted them to be.  Dressmaker, Good Housekeeper, Sewmor, Wizard, and Bel Air, just to name a few.  Some were made in fabulous colors, not just black.


The other manufacturers built what was already a great success and well liked, a Singer.   I think I helped prove "Imitation is the sincerest form of flattery".

I learned quite a bit of information researching this blog.  I hope you enjoyed it.


For in depth information on the Singers mentioned here, please see:

My little Bantam will be added to my collection and used for my next project.

I finished Joe's 7330 shirt.  I made it out of a blue bed sheet on my Singer 327.  I think it turned out quite well, and fits Joe like a shirt should.

I used a Greist #1 buttonholer with my Singer to make the buttonholes. This Greist is a straight-stitch model. It makes wonderful buttonholes.

I was asked on a previous blog what I like so much about the Simplicity 7330 pattern.

Just to name a few:

It fits me, with no alterations.

There is no hand sewing.

It can be made with a collar stand or a notched collar.

There are a minimum of pieces to sew together.


I decided to start out with a pattern I was familiar with for the first project using my Singer 327.  If you haven't guessed yet, it is my Simplicity 7330 shirt pattern I like.

This is a shirt for Joe.  He put on a little weight because of some new medication.  I am making this shirt in a large, using a bed sheet.  It has short sleeves and a collar stand.


I made the pocket with a cardboard pattern I folded the material around, then ironed to fit.  Made for real  crisp edges.