This week a camel was embroidered.  When I started this project, I thought eight weeks would seem like forever.  However, here I am at the end of week three already.
This week assembly started.  A piece of decorative fabric was supposed to be used for one of the squares.  Since I didn't have any, I embroidered a little boat on a piece of material.  I figured a boat would go with any travel project.

This is what I have so far:

I have no clue to what I am making.  Hopefully San Francisco Stitch Co. has something good in mind.

It pays to be nice to  people.  I went to the thrift store a few days ago and a clerk told me to come in the back room.  Oh my!!!   There was a stack of sewing machines and I was getting first choice.  I was like a kid in a candy store.  I was immediately drawn to this Singer 337 because of the color.  I already have a 327 which is a similar model.  I reviewed my 327 here.

There were some newer machines and some older, including a Singer 401 taken out of a table.  Looking back I should have bought it also, but I already have a 401 I bought at the same thrift store a few months earlier.  I keep thinking if I was entrepreneurial I would sell them on eBay and make a profit, but I know myself, and I would keep them all.

One interesting thing was the women would turn the machines over for "recycling"(not sure what that meant) if they did not run properly, or were missing a foot pedal.  I asked if they could start a parts bin, or sell machines "as is", and the reply was that it would be too involved since they were volunteers.  I was offered a volunteer job of checking sewing machines, but I turned it down knowing I would bring too many home.  The clerk agreed, saying she has four Singer 301s she bought there.  The funny thing was she asked if I had a 301 to sell her, because she loved them so much.  And I thought I had it bad!

A little side note:  I was walking my dog today and just a block from my house at a yard sale was a lonely Singer sitting on a table.  I thought it was a 301 at a distance, then as I got closer, I thought it was a 404 but somehow different.  I inspected it to find out it was a 404G.  A Singer 404 made in Germany.  I will be sure to blog about this one later.  I told myself, I could flip it for some money.  But, it is so quiet, so smooth, and so lovely, how could I?  One more to the collection.

This is a machine made in 1965 and 1966.  The instruction manual actually says "new, improved model".  Which means it has a needle position selector.  So, this is a zig-zag machine with a three position needle.  It has an internal motor and is all steel inside, except for the plastic zig-zag cam.

The following year a 347 was made.  It looks identical, but according to my research it has a lot of plastic inside.


If you want to see more,  you can watch me on youtube.

I embroidered the second installment of the mystery stitch project.  Looks like a tropical fern.  The clue says my destination isn't as exotic as the embroidery for this week. 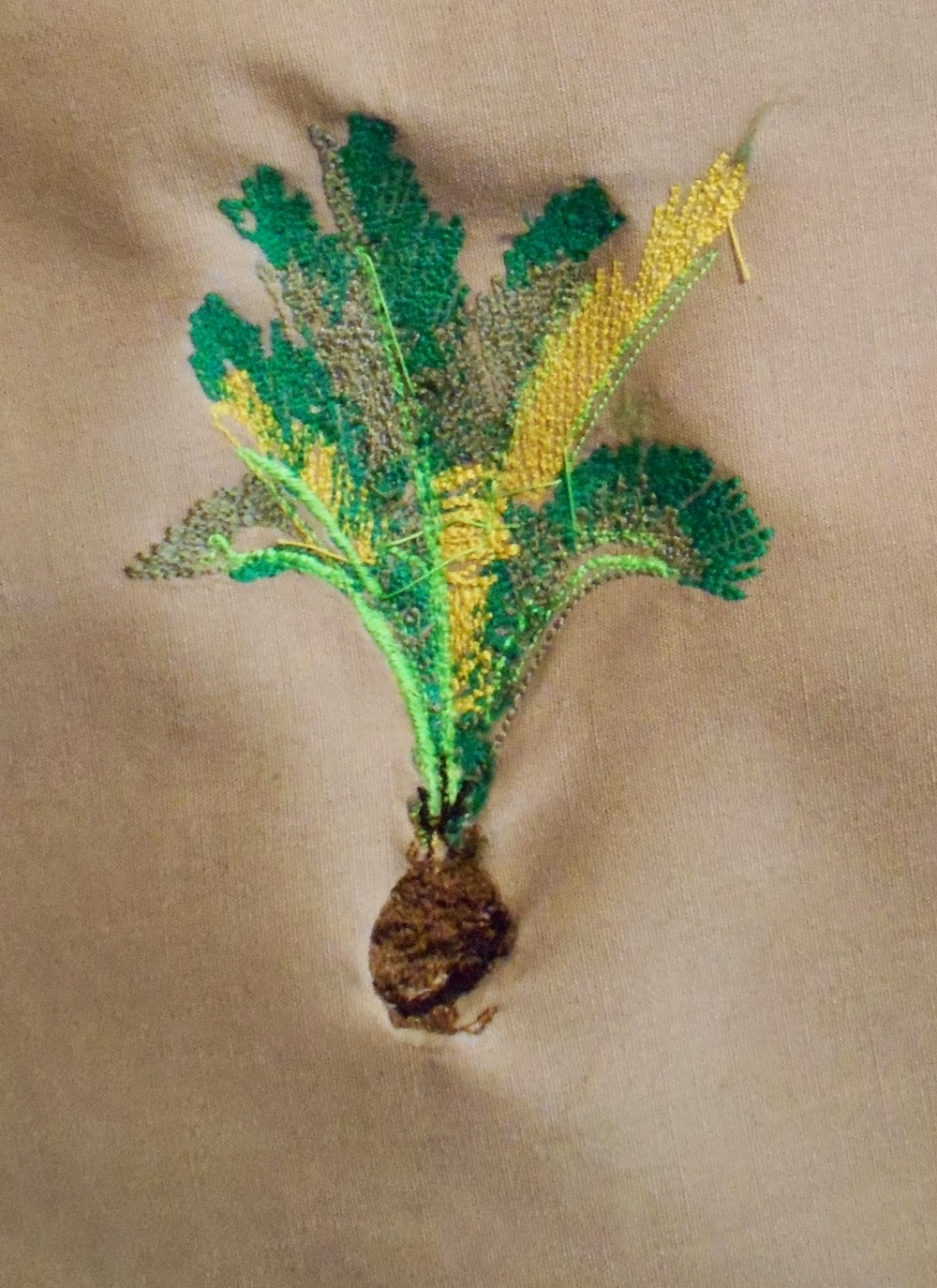 Again, this stitched out wonderfully.  San Francisco Stitch Co. sure knows how to program embroidery designs.

I wonder what I am making?

I have started a new embroidery project.  It is called the Mystery Stitch Project.  I found this intriguing project on San Francisco Stitch Co. . There are some beautiful embroidery projects on this site, so I am sure this "Mystery Project" will be something I will enjoy.

How this works is a new part of the project will be available on this site Mystery Stitch Projects every Friday for eight weeks.  However, a person only has the one week to download the installment for free, then it will cost a $1.49.  So if you want to do this, be sure to download every week.  The site promises scraps of fabric are all that will be needed.

I did the first installment today.  My Janome 200 was ready for the challenge.  The project took 12 different colors and stitched out quite nicely.  The people at San Francisco Stitch Co. seem to know what they are doing with programming embroidery designs.

Looks like a little suit case.  Hmmm...  It will be fun to see what the project will turn out to be.


Posted by Thin Man Sewing at 5:57 PM No comments:

I made a wallet for my coupons this weekend.  It was a project I found on the Janome project page here.

It took a few hours using a scrap piece of fabric, fusible interfacing, and fusible fleece.  The instructions call for an embroidered initial on the front.  However, I decided to write "COUPONS" with my Viking 980 since I was doing the project with it.  I also wrote different category names on the pockets.

Because of the thickness of the project, it was hard to keep square under the machine's foot and a few corners aren't square.  If I did the project again, I would probably use my Bernina 707 to plow through all those layers. 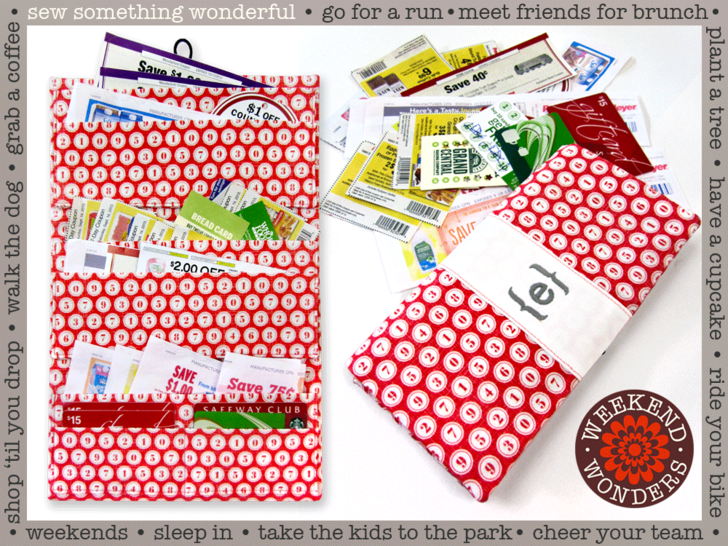 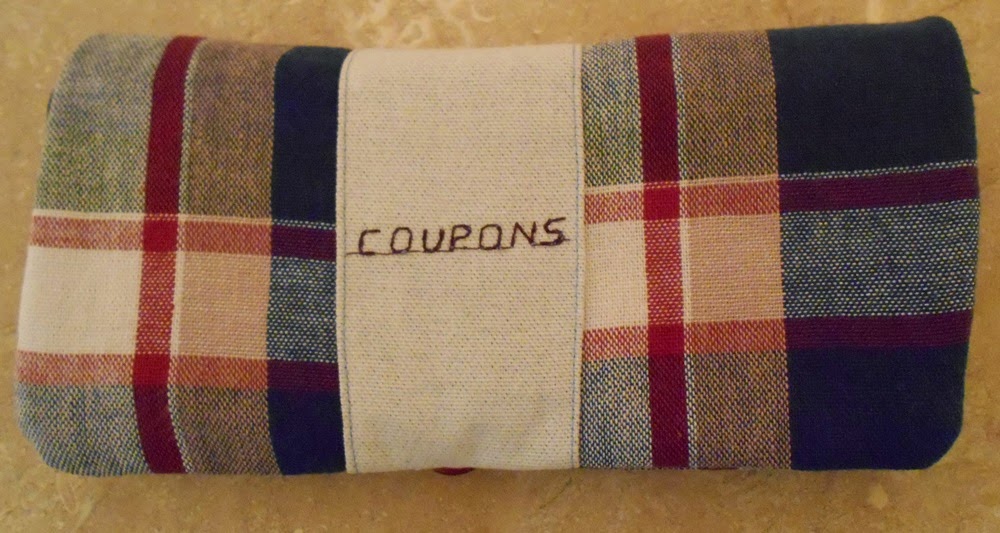 It was a fun little project.  I think more fun will be unfolding it in front of the cashier to find the coupons I need.